Villas in Quebec City, the capital and remains the only North American city still fortified by its original city walls. The crown jewel of French Canada, it is one of North America's oldest and most magnificent settlements.

It has a picturesque old town and is a UNESCO Heritage site, a living museum of narrow cobblestone streets, 17th and 18th century houses and soaring church spires.
There is a glimmer of old Europe in this city with classic bistros, sidewalk cafes and manicured squares.
The main focus of this city should be the Old Town, split between the Old Upper Town (Haute Ville), perched above the St Lawrence River on the Cap Diamant cliffs, and the Old Lower Town (Basse Ville), where Samuel de Champlain established the first French foothold in 1608. The Old Town is packed with museums, mansard-roofed houses and cobblestone streets just begging to be explored.

A major attraction is Chateau Frontenac, a historic hotel that dominates the city's skyline. Québec has much to offer; both the Laurentian Mountains and the Saguenay Region offer a variety of winter sports and activities. Or the spectacular Gaspé Peninsula in the South St. Lawrence area and enjoy fresh maple tapped directly from local trees. 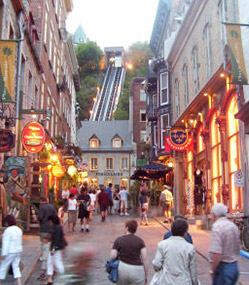