Quebec a great place to hire a villa in a province drenched in tradition and history. It is a former French colony that has retained, and built upon, its strong links to French history, lifestyle and culture. Shop-fronts and street signs inform passers-by in French first and English second, giving the province a European flair uncommon to the rest of North America.

A vast province that makes up about one-sixth of Canada, Québec covers diverse landscapes - from historic cities to isolated Arctic tundra. The region reaches almost to the Arctic Circle in the north, borders the American states of Vermont and New York in the south, and Hudson Bay in the west. The St. Lawrence River, almost 1200 kilometres long, runs through the most populated regions of the province.

The province of Quebec has a well-known reputation as a tourist destination. From the Outaouais River to the Roche Percé and from the USA border to the Arctic, all along the shores of the Majestic St.Lawrence River, the province hides many colourful, picturesque cities and villages. 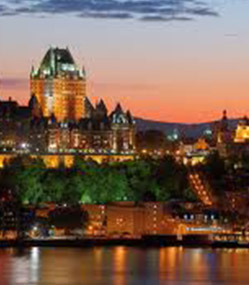